Music From Another Planet 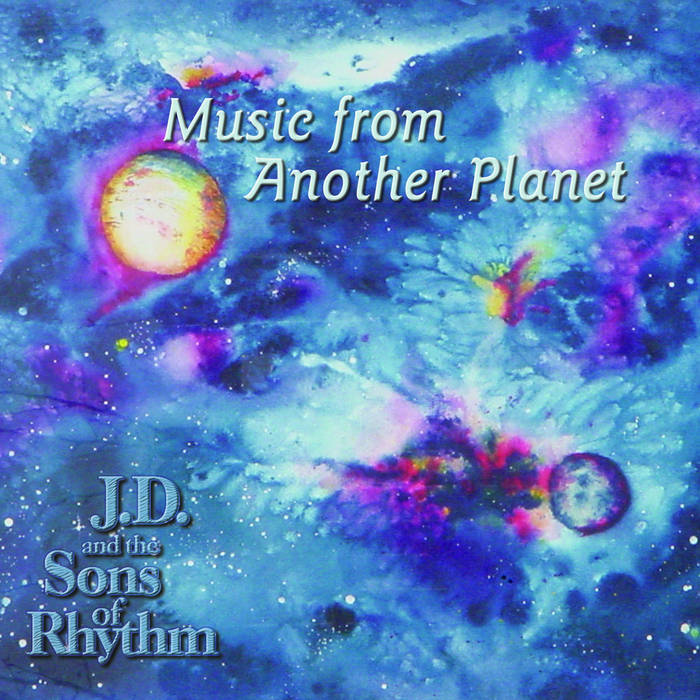 Music From Another Planet strikes a chord - with the galaxy.

The music created for this album is music born of passion and driven by planetary rhythm. Within the universe of light and matter, this music brings you a universe of sound. In Earthly terms, it is something like Pink Floyd with chops playing collective jazz improvisation.

Moving in waves, with long threads of discussion, the music undergoes evolution within the jams. From the gentle rocking of Troy to the funky intensity of Taking Off, the music rises as the discussion deepens. A backdrop of fluid sound supports searing guitar solos, harmonically dense keyboard solos, and classic bass solos.

This other-worldly music builds in intensity throughout the two discs, ending in a jam which could be described as World Music on Planet Earth. After having come through the Galaxy on your return, you find you have landed where you started, transformed while the rest of the world sleeps, unaware of your journey (unless your stereo is really loud). For them, no time has passed. For you, Music From Another Planet has carried you away and back again.

Musicians learn to play with one another simply by doing so. The sessions and gigs that J.D. and the Sons of Rhythm have done together have provided the experience. Midtown Recording Studios, Forward Hall, and now the Roadhouse Theater, have all provided the locations. The forays into uncharted waters have provided the inspiration.

Now, the music has landed.

The fruits of inspiration became MUSIC FROM ANOTHER PLANET, 15 tracks of music.

"We decided to remain in the same format on this, our fourth album; on the spot improvisation. On six of these songs, we used both Tony and Dave. The double bass format worked beyond my imagination. Neither Tony nor Dave had worked in a double bass situation, but handled themselves well enough technically and tastefully that I found what they did quite amazing. Sheldon played with us for the first time, but it won't be the last. Frank and Mike obviously always make it work and are permanent fixtures with us. Everyone seems comfortable with our floating poly-rhythmic concept. Kenny and Scott add a different dimension which makes this project a well-rounded musical journey.

"We hope you enjoy what we are doing. All these players know how to create musical images that are colorful, complex and flowing. Jayson, Rickie and I just love working with this amazing group of people."

“On the spot improvising,” “Floating Poly-rhythmic concept,” and “Images that are colorful, complex, and flowing” almost say it all. I can think of another way to say it: “The Miles Davis electric period didn’t end in 1975.” Now THAT’S saying something.

Many artists have tried to recreate the spontaneous combustion that pure musical improvisation is capable of, some succeed, most fail. J.D. Hopkins and the Sons of Rhythm set themselves apart because they make no effort whatsoever to play “songs”; therefore, they have complete freedom to really improvise “on the spot.” The key ingredient that makes everything work is the hard driving Poly-rhythms created by all the percussionists and the sensitive bass playing that embellishes the drum work. They work so well together it’s hard to imagine that everything they do is a jam. Another key ingredient is the ensemble gathered here is all ears and full of respect. They listen to each other and don’t step on each other’s toes.

Total improvising is a very risky business and if it’s not done well, can easily sound like a cat-fight refereed by Bobcat Goldthwait and Gilbert Gottfried. To be perfectly honest, there are parts that are less coherent than others, and even some parts that might be considered a little too Avante Garde for the average listener. However, that is to be expected when improvising at such a risky level of freedom.

This is the real deal, total improvisation with a groove. I personally give J.D. a lot of credit for gathering such high caliber musicians together and playing music that’s so full of risks that many musicians either won’t go near it or can’t even play it.

One of my favorite quotes from Miles Davis comes to mind when I hear this great music. Miles was being heavily criticized for the music from “On The Corner” and his paraphrased response was: “Let’s see you do it”