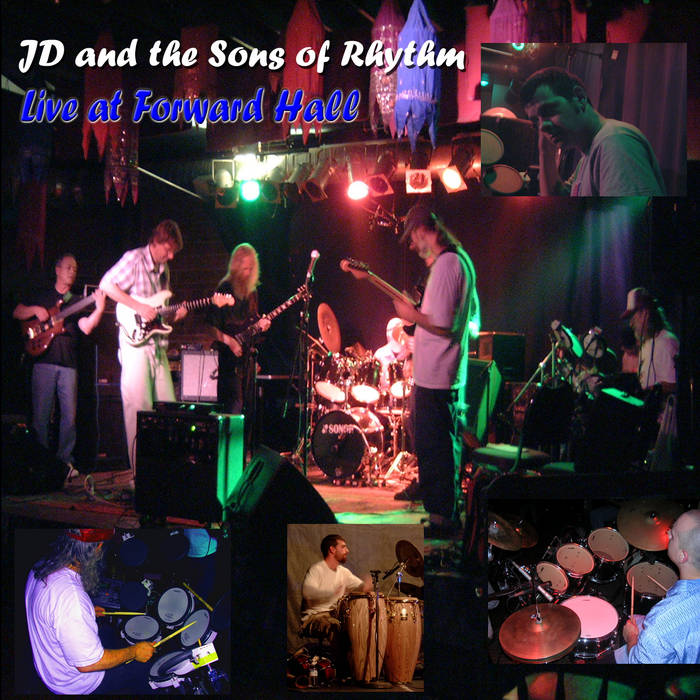 "It's cutting-edge muzak from God..."

"Music like this makes even celestial bodies lean in and listen"

"If your music was pumped through public sound systems all over, people would go around a lot healthier, happier, and with energy."

From the primordial depths comes a rhythm as deep as the Earth Herself, growing slowly as a chant sung first by one, then joined into a chorus. Like dawn's first breath, the rhythm sets the tone for what follows.

The song develops and themes emerge, with some taking flight and soaring into the brightness of the day. Spontaneous transitions take the experimental music where no one expected, and then the groove settles in like this was the intended destination. World-Beat meets Funk meets Jazz meets Rock in an ever-changing and evolving texture.

After this spontaneous foray into collective improvisation leads to a moment of conclusion, you find you are in a club watching and listening to J.D. and the Sons of Rhythm perform live, playing their brand of creative improvised music.

As they play, you find each journey is unique, yet the sensitivity and joyous aura of the musicians who play this music tie it together with themes, styles and sounds, showcasing the Sons of Rhythm sound. Six double-albums recorded live in the studio by primarily the same group of players season the collaborations of the group, who merge ideas and change roles with ease and comfort.

In many ways the music comes in slow waves, building in intensity and then releasing, sometimes quickly, sometimes slowly. The players breathe the music in and out, and let this guide the movement. The moments of rest encapsulate the music, allowing for a time to clear the palate and open to something new. These times allow for exchanges of players and keys, and shape the presentation of the live performance and the recorded documentation of that performance.

Two full albums worth of live, spontaneous, creative improvised music is the result. With the excellent recording facilities of Midtown Recording Studios literally connected to Forward Hall Concert Club, the technical side of the recording is first-rate. The sound is studio quailty without losing the live feel generated by the energy and synergy that cold February Erie evening.

This music will keep you jamming, and having fun. J.D. and the Sons of Rhythm play because they absolutely love to play. This format gives them the freedom to explore, stretch and create with their fellow musicians, and share it with everyone. You will love the result!

musicSUBMIT press release 10-2004
PA's J.D. and the Sons Of Rhythm
Maybe It's Something In The Water…

…maybe it's just the creative imperative, but Erie, PA's J.D. and the Sons Of Rhythm keep up their prolific ways with the release of two more double CDs Smoke Shadows and Imagination Doctors. This extends the band's catalog to six double CD's in half as many years.

The group is fiercely loyal to their home base on the shores of Lake Erie, recording in a local studio and using local vendors for every element of production, from the printing of back trays to the reproduction of the discs themselves. They're dedicated to reaching a broader audience, though, with a national print advertising program in magazines including Downbeat, Relix and Modern Drummer.

As their name implies, the root of the band is in their rhythm, and the rhythm section is a family affair, featuring drummer J.D. Hopkins and his sons Rickie and Jayson on a variety of traditional, electric and hand drums. The trio builds a foundation for jams that are enhanced on the new releases by Joel Polacci's congas, a quartet of guitarists, Frank Singer, Mike Ohm, Joe Popp and Sheldon Peterson, and a pair of bassists, Tony Stefanelli and Kenny Cornelius. The combination provides all the elements needed for the group's groundbreaking improvisations, which incorporate elements ranging from jazz to classical, with stops along the way for rock, fusion, reggae, Latin, funk and hip-hop.

Smoke Shadows is typical of the group's output, offering twelve of their trademark jams, recorded live in the studio and edited only for length. Imagination Doctors is a departure from their previous efforts, with guitarists Frank Singer and Mike Ohm demonstrating their studio skills by creating multi-tracked overdubs to complement improvised rhythms on disc one, with the second disc devoted to a 46 minute jam presented in its entirety.

More information is available through www.jdhopkins.com, where all of the band's releases can be found, along with recordings by the members in other performing and recording combinations, a combined discography of over 20 releases. The music is distributed nationally through jdsonsofrhythm.bandcamp.com.

Smoke Shadows and Imagination Doctors are great places to get started, but don't wait too long. Three more double discs are slated for release, one featuring a live performance. There's no doubt that J.D. and the Sons of Rhythm have energy equal to their considerable talents.

Or maybe it's something in the water…